St. Benedict said, “Idleness is the enemy of the soul; and therefore, the brethren ought to be employed in manual labor at certain times, at others, in devout reading.” Satan works in idleness, so protect yourself by planning both your work and your recreation! 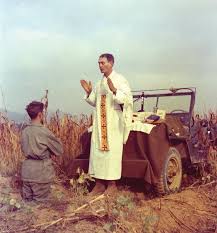 We are living in an unusual time in the world, where we are restricted in where we go and what we do. One story comes to mind during this time and that is of Fr Kapaun. Father Emil Kapaun was stationed in Japan when the North Koreans invaded South Korea in June 1950. On November 2, 1950, over 20,000 Chinese Communists, who were fighting with the North Koreans, captured Father Kapaun and the other men of his unit during the Battle of Unsan. He had several chances to escape during the battle, but instead, he stayed behind so he could find more wounded men to evacuate. The Communist military forced the Americans to march over 80 miles in the bitter cold to a prisoner-of-war camp. Father Kapaun ministered to his fellow prisoners by encouraging them and sometimes even carrying them on his back. In his seven months in the prison camp, Father Kapaun spent himself in heroic service to his fellow prisoners without regard for race, color, or creed, giving them help and hope when they needed it most. Ignoring his own ill health, he nursed the sick and wounded, stole food for the hungry, picked lice off of men, washed dirty and soiled clothing, and encouraged men through prayer and humour to keep fighting for life. He never lost his faith during this time, reminding his fellow POW to never lose hope and God is on your side. Fr Kapaun visited as many as 200 soldiers a day, treating wounds and praying the rosary, even atheists prayed the rosary with him at the camp.  Falling sick, the Chinese moved Father Kapaun to a so-called hospital, where, denied medical assistance, his death soon followed on May 23, 1951. We are not living through what Fr Kapaun lived through, but we do share the fact that we cannot avail of the sacraments right now. We are all called to persevere during this time and we can try to see this time in quarantine as a time of mission, whilst growing more in love with God, in virtue and creating good habits to help us thrive in life.

Here are some practical tips to help you create a routine whilst in quarantine:

2. Have a to-do list for each day. You can put this into sections. For example work, personal, exercise and prayer. This will help you structure your day as a whole and be more productive.

3. Join live prayer groups. There are many online prayer groups for young people and many conferences and retreats online. This is an amazing opportunity to learn more about your faith and grow more closer to God.

4. At Pure in Heart we are offering for members to do a free course in Catechesis, please do avail of this opportunity as it is a great opportunity to learn more about the Catholic faith.

5. Set yourself goals for the week. What do you want to achieve? Maybe it is finishing that book you have been reading for months, or exercising more regularly, etc. We all have different goals we want to achieve.

6. Plan things, don’t leave things to the last minute. Set up a time to call your friends, to pray, to rest, to exercise, to study, to work, etc.

Fr Kapaun pray for us

Bible Study Weekly on Wednesdays at 7pm at 23 Merr

We are back in our home at 23 Merrion Square North

We are back on Instagram! Praise the Lord! Thurs