Today, the 6th July, is the Feast Day of the Patron Saint of Pure In Heart, St Maria Goretti. 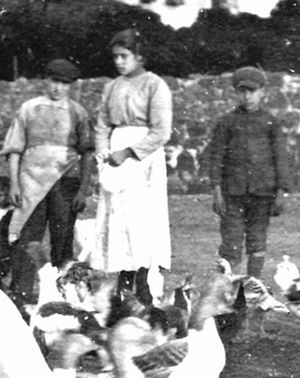 Maria Goretti was born in Italy in 1890. When she was 11 years old she was attacked by her neighbour, a young man named Alessandro who tried to force himself on her. When Maria Goretti resisted, he stabbed her repeatedly. She died the following day, the 6th July 1902. Before she died she forgave her attacker Alessandro. Her last words were, “I forgive Alessandro Serenelli … and I want him with me in heaven forever.”

While Alessandro was in prison Maria Goretti appeared to him, surrounded by lilies (the flower symbolising purity) and forgave him. This was the start of his conversion. When he was released from prison he visited Maria’s mother, Assunta, and asked her to forgive him, which she did. He spent the rest of his life as a lay Franciscan brother in a monastery.

Maria Goretti was canonised a Saint by Pope Pius XII in Rome in 1950. Half a million people attended the ceremony in Rome, the largest crowd in history to attend a canonisation up to that point. Among those present was Maria’s mother Assunta.

St Maria Goretti’s short life is a shining testament to the virtue of chastity and the unfathomable power of mercy.

St Maria Goretti, pray for us.

Must RSVP via email 😁

Every Wednesday at 7pm Starting today 😁 23 Me

Any gifts or bottles to donate for our raffle this

Tonight a very special Mass in memory for our dear

Get your tickets by November 20th On eventbrite